….AS NAPTIP BOSS PLANS TO EXPAND THE SCOPE AND ACTIVITIES OF THE AGENCY.

Director General of the National Agency for the Prohibition of Trafficking in Persons (NAPTIP), Senator Basheer Garba Muhammed, has described NAPTIP as one of the Agencies with the biggest mandates that touches various families and Societies in the Country.

As such, he said there is the urgent need to unbundle and expand the scope of the activities of NAPTIP to be able to render mega rehabilitation services that will meet the needs and expectation of the victims and scale up its awareness and sensitization strategies.

Senator Basheer Garba Muhammed, stated this when he played host to a delegation from the International Organization for Migration (IOM) led by the Country Chief of Mission, Mr. Franz Celestin.

The NAPTIP boss used the opportunity to unveil his strategic goals and visions for the Agency which included expanding the scope of NAPTIP in the areas of improved and remodelled Victim Rehabilitation Scheme, reloaded awareness and sensitization of all parts of the Country taking into consideration the listening culture of different section of the Country.

In his words, “I want NAPTIP anti human trafficking messages to be in the minds at the doorsteps of all Nigerians irrespective of their languages and locations. We shall use radio, television, newspapers, social media platforms, Nollywood actors and even local town criers”,

“Nigerians need to know more about NAPTIP, the various offences and punishment attached to them as well as the various legislations put in place to protect our Citizens from all forms of exploitation.

“Our anti human trafficking messages must be syndicated to all languages so that everybody can understand it. This will go a long way to reduce the vulnerability of the people.

“I strongly believe that it is better and more economical to take step now and sensitize the people than doing damage control after they must have been deceived and trafficked by human traffickers” Senator Garba Muhammed said.

He appreciated the timely and sustained intervention of the IOM in all thematic areas of the Agency which he said have aided the realization of the mandates of the Agency and solicits for more supports and collaboration.

In his response, the IOM Chief of Mission congratulated the NAPTIP DG for his appointment and commended him for the remarkable achievements recorded at the National Commission for Refugee, Migrant and Internally Displaced Persons and pledged that Organization will continue to support the Agency. He disclosed that in order to boost the enlightenment programme of the Agency, the Organization was in the process of donating another “”Blue Bus” to the Agency.

The IOM Chief of Mission recalled some of the Organization’s supports to include the donation of the first Blue Bus to the Agency few months ago, the establishment of the Legal hub to accelerate prosecution and enhance legal discuss on human trafficking, the establishment of States Task Forces on Human Trafficking in no fewer than 14 States in Nigeria as well as capacity building for operatives of the Agency among others.

He assured the Director general that IOM shall continue to support NAPTIP in order to reduce the incidence of human trafficking and irregular migration in the Country.

The IOM Chief of Mission was accompanied to the NAPTIP by the Head, Programme Support Unit, Prestage Murima and Ukamaka Osigwe, a Programme Officer, Migration Management. 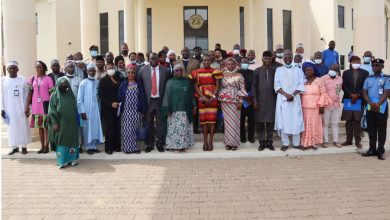 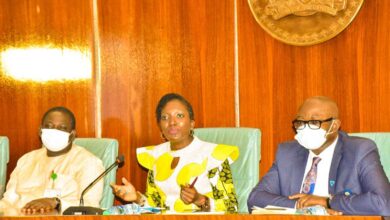 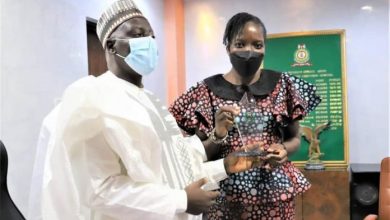 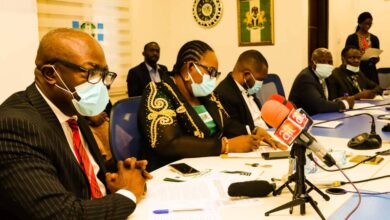